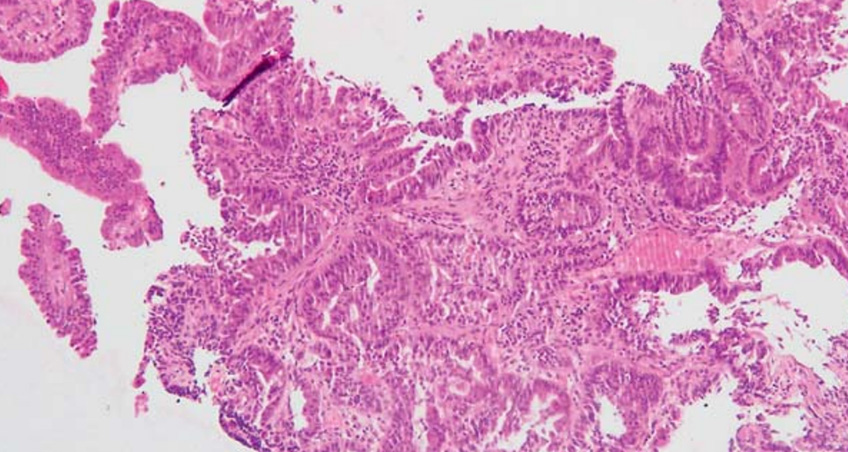 A 65-year-old man with a 1-year history of recurrent episodes of right upper quadrant colicky pain presented with this complaint to our outpatient clinic. The patient’s past medical history included hypertension. He underwent a transabdominal ultrasound scan, which showed a hypoechoic nodular lesion of 12 mm in the proximal common bile duct (CBD), without evidence of distension of the intrahepatic biliary ducts. Therefore, an endoscopic ultrasound (EUS) was scheduled and performed. The EUS examination confirmed the presence of a hypoechoic nodular lesion of 13 × 12 mm in the proximal CBD, along with a slight biliary stricture. Given the suspicion of cholangiocarcinoma, endoscopic retrograde cholangiopancreatography (ERCP) was indicated. After informed consent for the procedure and appropriate sedation had been given, ERCP was performed. Cholangiography showed a slight biliary stricture in the proximal CBD. After sphincterotomy had been performed, we proceeded to peroral intraductal cholangioscopy (IDC) using the Spyglass DS system. IDC showed a polypoid lesion, with a papillary pattern and an irregular undilated vessel (F3-V2), of almost 13 mm in the proximal CBD without hilar involvement. A cholangioscopy-guided cold macrobiopsy of the choledochal polyp was successfully performed using an IDC snare (Spyglass retrieval snare) and the specimen was collected for histopathological examination. At the end of the procedure, the resection site was clear and there was no evidence of either bleeding or biliary leakage.

Zulli C, Sica M, Fusco M et al. Use of a cholangioscopy-guided retrieval snare for the macrobiopsy of a choledochal polyp. Endoscopy 2022 Feb 15